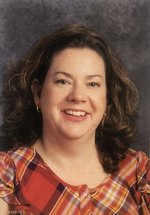 Hi! My name is Sadie Robbins and this is my 19th year at Prattville Kindergarten. I grew up in Prattville and graduated from Prattville High School. I love the fact that I teach in the same school system that I attended. I graduated from Troy University with a Bachelor's Degree in Early Childhood Education. I have been married for nineteen years and we have two daughters and two pets. Amelia is fifteen and is in the tenth grade. Lillian is eleven and is in the sixth grade.  Our girls keep us very busy with band, theater and swim team.  Since there are more girls in our house than boys, Mr. Robbins says all pets have to be boys.  :)  So we have Biscuit, our dog and Carrot, our cat.

I have always wanted to be a teacher and I take great pride and enjoyment in my job!

I know we are going to have a GREAT year!!

Each full week of school we will have a Top Banana of the Week.
The Week focuses on the uniqueness of each child and reinforces
positive feelings of self-worth.  Below are some special activities your
child will be involved in throughout their week.
Here are the details of being the star of the week.  In September a schedule for the

year will be sent home.

"All About Me" poster , estimation jar items & "All About Me" page
**This poster can include some of their favorite things and pictures
Of them with their family and friends.  Please send items for our
Guessing jar (1-40 objects such as toy cars, erasers, hairbows, candy
Etc.).  We will be guessing how many there are, so don't let your
Child know how many!  Please fill out "All about Me" page.

Favorite Snack
**Please send one of your child's favorite snacks (enough to share
with the entire class-20).

Favorite Toy
**Please send one of your child's favorite toys.  Your child
will get to share one of their favorite toys (not to big).  Everyone
will have a turn to ask questions about the toy,  it's a lot of fun!

Favorite people
**Your child will get to choose a few special guests to have lunch
with him/her.  Usually children enjoy inviting their grandparents,
parents, aunts or uncles  Please send a note to let me know how many
people will be eating lunch with your child that day.

This is a list of books that I read in large group throughout the year. If you would like to purchase any of the books from this list that would be great! New or Used

Snow is Falling by Franklyn Branley

My Five Sensnes by Aliki

Tacky the Penguin by Helen lester

The Skin you Live in By Michael Taylor

Each Kindness by Jacqueine Woodson

Spaghetti in a Hotdog Bun by Maria Dismondy

Papa please get the moon for me By Eric Carle

Storm is Coming by Heather TekavecA

I Don't want to be a Frog by Mike Boldt

Seed to Plant by Kristin Rattini

The Sandwich Swap by Queen Rania

All about Teeth by Mari Schuh